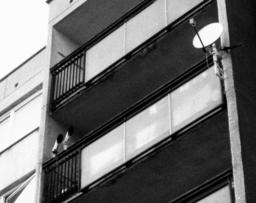 Sometimes during networking of buildings, there is a gap which contains property of someone else. For example two buildings on sides of a road. The range of red light Ronja is 1.4km, so even more distant buildings can be networked this way.

In such situation it may be difficult to get permission of the owner to dig into the ground or to install an overhang cable. Ronja can be a convenient solution to this problem if 10Mbps data rate is enough and ocassional dropout on fog doesn't create a problem.

For bridging streets, Ronja can be built in a smaller version with 90mm lenses and reduced range. This makes the device smaller, easier to place and less visually disturbing should it be visible from the street. The top picture in the right shows how inconspicuous a 90mm Ronja can be compared to a satellite dish. 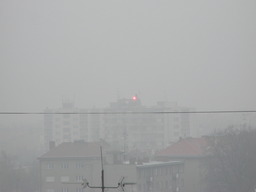 The resulting connection has properties similar to connection by optical or metallic cable - steady full-duplex throughput and negligible packetloss. The only difference is that Ronja can drop out on a fog, unless it's installed on such a small distance (over street), where there is some visibility even in a dense fog.

But Ronja is sensitive to dense fog only. In the situation on the picture the link was still working fine, with RSSI of 210mV.